This article just featured on NZ Gardener Magazine April 2014 edition and contains profile of poisonous elements in plants & fruits. I feel it's a very useful article and those having small children may consider having a look at this article.

There recently was a discussion on edible portions of plants which in theory appear to be safe but nevertheless contain an element of risk and frankly a folly to undertake unless deemed safe by a doctor.

Though experienced gardeners would be knowing about most of the hazardous portions of plants especially bulbous but nevertheless there may come across new information such as peach stones containing cyanide which can be harmful if crushed. 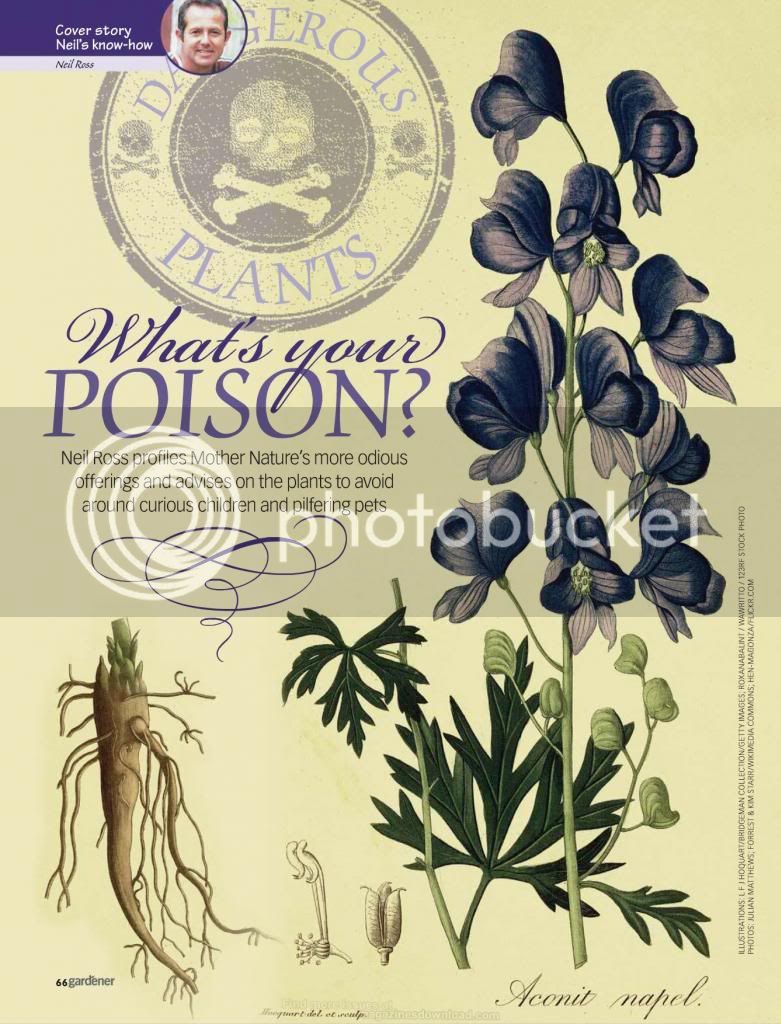 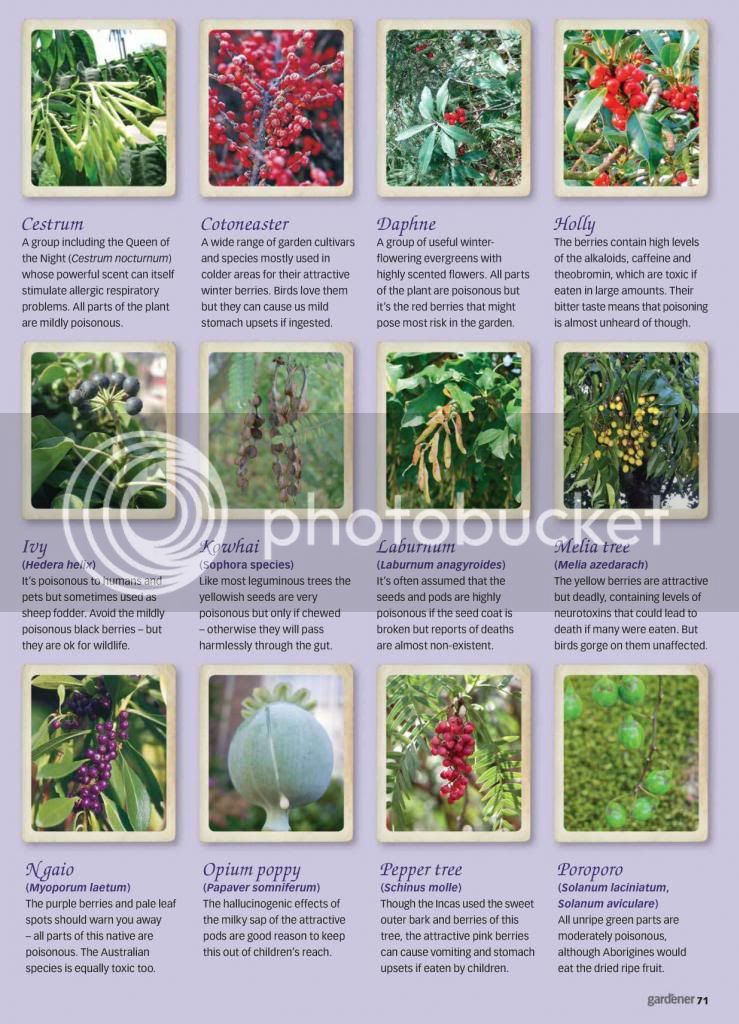 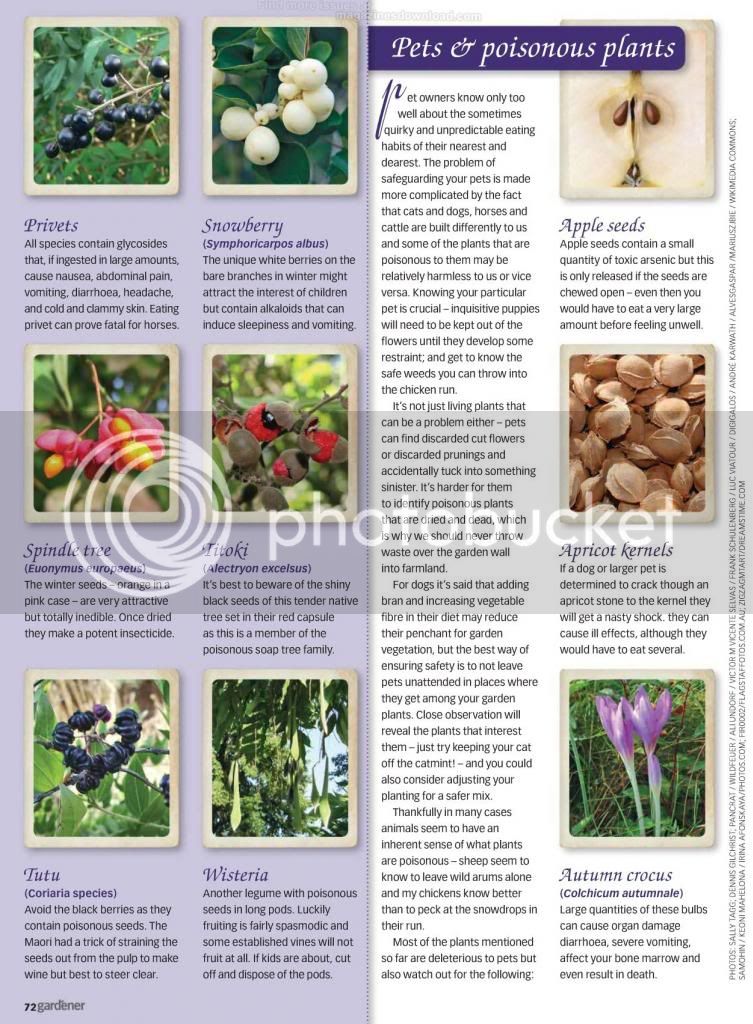 That is only lovely and handy compilation Thankyou for sharing
http://farhansgarden.blog.com/
Top

Very useful information.Thumb rule should be, not to nibble at/eat anything which is not commonly/tradionally eaten.
Top

A very useful compilation. Some plants have been gifted the by Creator to defend themselves - very well. Additionally, members can share their personal experiences here about the local plants for the benefit of the rest. One example that I can add is that of Agave. It is a common garden plant. If you trim Agave leaves, be very careful with any juice or any cut surface of the leaf. The juice, after contacting the skin, gives one of the most painful skin reactions. In my case, the pain lasted for many hours.

Saps of Acokanthera Oppositifolia (Bushman’s Poison), Allamanda vine, Adeniums & Plumeria (Gul-e-Cheen) are also poisonous. The toxic sap in particular of Acokanthera is used by the tribal bushmen in Africa to lace the tips of their arrows for hunting.

We need to remember that everything has been created for a specific purpose by our Creator. The toxins of Acocanthera are used to treat Snake & Spider bites, stomach aches etc. I myself tend to use Homeopathic medicines which are derived from Honey Bee stings.

The medical benefits of toxins derived from snake venom are countless. So much so it research is being done to discover new cures for illnesses based on these toxins. Some excerpts in quotes from an article on venom titled “Venom: The Bite That Heals”.

“Venom—the stuff that drips from the fangs and stingers of creatures lurking on the hiking trail or hiding in the cellar or under the woodpile—is nature’s most efficient killer.

All venom is multifaceted and multitasking. (The difference between venom and poison is that venom is injected, or dibbled, into victims by way of specialized body parts, and poison is ingested.) Imagine administering poison to an adversary, then jabbing him with a knife, then finishing him off with a bullet to the head. That’s venom at work”.

“Ironically, the properties that make venom deadly are also what make it so valuable for medicine. Many venom toxins target the same molecules that need to be controlled to treat diseases. Venom works fast and is highly specific. Its active components—those peptides and proteins, working as toxins and enzymes—target particular molecules, fitting into them like keys into locks. Most medicines work the same way, fitting into and controlling molecular locks to thwart ill effects. It’s a challenge to find the toxin that hits only a certain target, but already top medicines for heart disease and diabetes have been derived from venom. New treatments for autoimmune diseases, cancer, and pain could be available within a decade”.

“We aren’t talking just a few novel drugs but entire classes of drugs,” says National Geographic Society Emerging Explorer Zoltan Takacs, a toxinologist and herpetologist. So far, fewer than a thousand toxins have been scrutinized for medicinal value, and a dozen or so major drugs have made it to market. “There could be upwards of 20 million venom toxins out there waiting to be screened,” Takacs says. “It’s huge. Venom has opened up whole new avenues of pharmacology.”

“Cobra venom, applied for centuries in traditional Chinese and Indian medicine, was introduced to the West in the 1830s as a homeopathic pain remedy. Clinical applications of carefully diluted cobra venom included “Angina pectoris. Asthma. Dysmenia. Hay-fever. Headache. Heart, affections of. Oesophagus, spasmodic stricture of. Ovaries, affections of. Plague ... Throat, sore.” But be careful, it was noted: “The curative dose [is] just within the limit of the pathogenetic dose.”

“The Brazilian pit viper’s venom led to the development in the 1970s of a class of drugs called ACE inhibitors, now widely used against hypertension”.

“Heart patients owe gratitude to the Eastern green mamba, a deadly African tree snake whose venom impairs its victim’s nerves and blood circulation. Researchers at the Mayo Clinic fused a key peptide from the venom with a peptide from cells in the lining of human blood vessels to make cenderitide, the subject of clinical trials. It is intended not only to lower blood pressure and reduce fibrosis (the growth of excess connective tissue) in a failing heart but also to shield the kidneys from an overload of salt and water. The closely related black mamba, a snake whose open mouth resembles a coffin and whose venom can quickly put you in one, holds a toxin with huge potential to be a powerful new painkiller”.

“Gila monsters, pebbly-skinned lizards found in the deserts of the U.S. Southwest, eat as few as three big meals a year (storing fat in their tails for the long wait), but their blood sugar remains stable. A component in Gila venom controls blood sugar and even reduces appetite. Exenatide, a drug derived from the venom in their saliva, works like a natural hormone, stimulating cells to deal with sugar overload but remaining inactive when sugar levels are normal. It even helps diabetics produce their own insulin and lose weight”.

“Meanwhile, a neurotoxin from the venom of the giant deathstalker scorpion has been found to attach to the surface of brain cancer cells. The overwhelming reason tumors come back is that surgeons can’t reliably distinguish good cells from bad at the growths’ edges. Magnetic resonance imaging—the best available diagnostic tool—doesn’t detect masses smaller than about a billion cells. This means surgeons have to find the boundaries between tumors and healthy tissue “purely by visual and textural cues,” says James Olson of the Fred Hutchinson Cancer Research Center in Seattle, Washington. “It’s a very imperfect science. Glioma cells weave into normal tissue, and pieces sometimes get left behind.”

“Doctors who treat glioma, the most common form of brain cancer, created a “molecular flashlight” by marking chlorotoxin with a near-infrared dye. On the very first trial, Olson says, the “tumor paint,” as he calls the scorpion-derived marker, “lit up the cancer beautifully. We were literally jumping up and down because we knew what incredible potential this had.” The paint reveals masses with as few as 200 tumor cells. “You can truly see the tumor almost cell by cell,” Olson says. “This will let surgeons get more cancer out, maybe even 100 percent.” Human trials on the dyed toxin will start later this year, and if tests go well, the paint could be used for prostate, colorectal, lung, breast, pancreatic, and skin cancers, as well as glioma, potentially saving or prolonging millions of lives every year”.

“Conotoxins in snail venom shut down nerve cell processes—which, it turns out, is an effective way to mask pain in people with late-stage cancer. Snail venom peptides called conantokins, which have exceptionally precise molecular targets, are being tested with some success against epileptic seizures. Both conotoxins and conantokins may be protective against Alzheimer’s and Parkinson’s diseases, depression, and even nicotine addiction”.

“Another sea creature, the sun anemone, has toxic tentacles that stun its prey before wrapping the victim—often a small fish or a shrimp—into its maw for dinner. But the anemone’s stinging cells, called nematocysts, fire off venom that contains peptides useful in treating human autoimmune diseases. The sun anemone holds promise for treating diseases such as multiple sclerosis, rheumatoid arthritis, psoriasis, and lupus”.